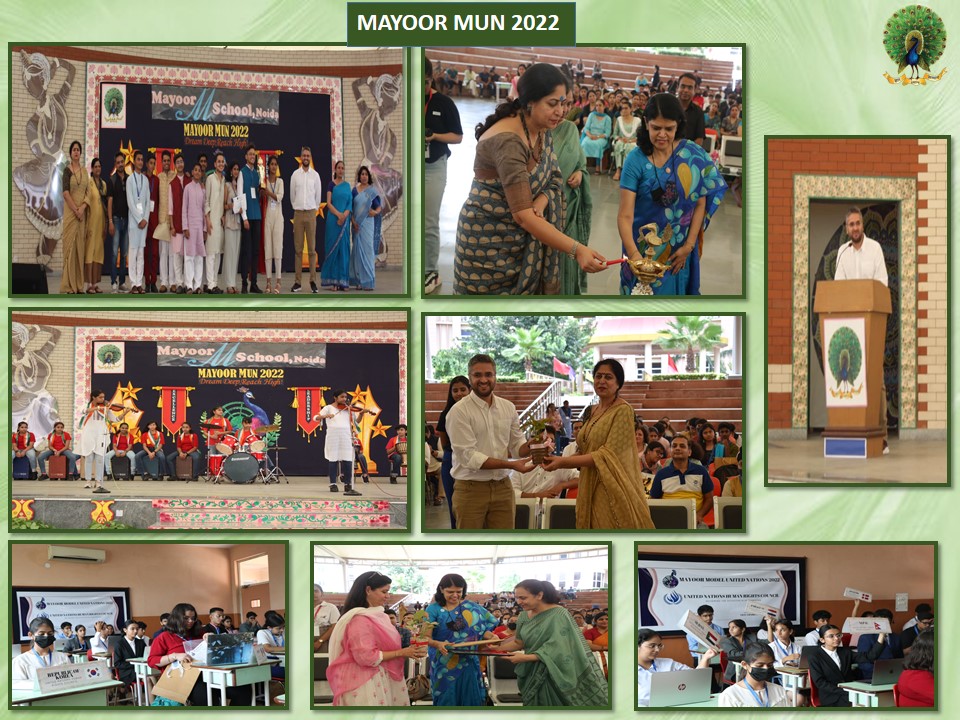 Mayoor School, Noida hosted the much awaited sixth edition of Mayoor School, Model United Nations Conference on 6 & 7 August 2022. More than 200 delegates not only from the reputed schools of Delhi NCR but also from other states of India participated demonstrating their leadership and collaborative skills- ‘Through Knowledge, Skill and Valour'.

The distinguished Chief Guest, Ms. Zafrin Chowdhury, Chief Communication Officer,  UNICEF India applauded the commendable efforts of the Mayoorians and highlighted the global issues and the need for reinstating peace. She also shared with the students her experience during a devastating typhoon in Philippines. Hereafter, the forum was declared open by the Secretary General, Arnika Singhal, with resounding claps. The Principal, Ms. Alka Awasthi elaborated the significance of such conferences and reiterated that open mindedness and team work are the key ingredients of success. The delegates in all the committees were extremely enthusiastic and indulged in healthy and productive debates on absorbing agendas. The invigorating conference came to an end with the valedictory ceremony in which the esteemed Executive Board was felicitated. Mr.Kiri Atri, Assistant External Relations Officer, UNHCR, India presided over the closing ceremony as the Chief Guest. In his address, he highlighted the need to speak about the global issues  and encouraged the delegates  to remember that MUNs are not for achieving awards, but it is to become a part of a generation that envisages to transform the world. This was followed by the Prize Distribution Ceremony wherein the best delegates in all the committees were honoured with a trophy and certificate for their hard work and excellence. The best delegation trophy was bagged by St. Joseph's College, Nainital amidst enormous cheer and applause.

The Mayoor School, MUN 2022 was a huge success and the participants went back home with wonderful memories to cherish.